Floods, Mountains and Inspiration - a journey...

Why we have to shift  time-of-use habits in our electricity consumption. 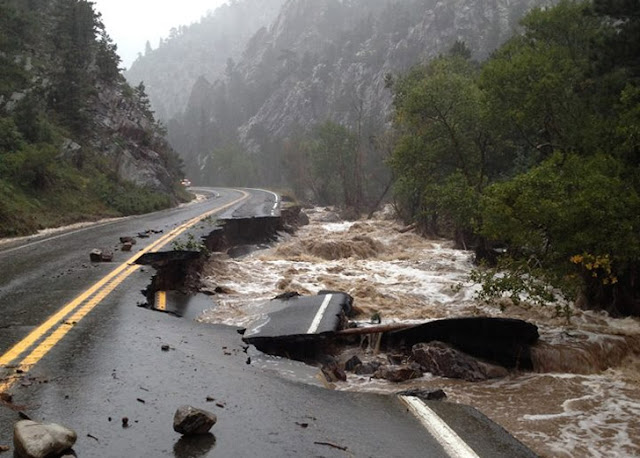 I arrived in Denver Colorado on 12th September 2013, with the intention of driving over the Rockies to Aspen, where I would meet  Amory Lovins and others associated with the Rocky Mountain Institute, RMI.
Amory has espoused a low or zero carbon energy economy for over thirty years.
But I arrived in the middle of the worst rainfall and flooding in Colorado since the arrival of European settlers – probably the worst for over 500 years.
To compound this, I drove north towards Boulder, near  where the flooding was at its worst.
I tried to enter Boulder by five different routes, all of which were initially closed to traffic by flood water.
I even drove to the North of Boulder to Longmont, the town worst hit by the flooding. I saw a full scale river in flood pouring over a big highway – something I can only describe as a biblical experience.
Eventually I managed to get to my hotel on the outskirts of Boulder. As I arrived, the flood waters were rising, and I had to wade through three foot deep water to get into the hotel, whose reception area was beginning to flood.
Getting out of Boulder the following morning was no easier. The roads to the West, where I wanted to go, were either flooded or subject to rock falls. On one road, an entire section had been washed away.
By the afternoon, the main highway west had reopened, and together with a large number of other cars, I headed out into bright sunshine, and an exhilarating drive over Independence Pass to Aspen.
What did the flood mean to me? I could have seen it as some kind of divine message, or as evidence for climate change.
I chose to interpret it as an exciting prelude to a significant journey.
2.       Rocky Mountain Institute

My hosts in Aspen, Todd and Wendy Mitchell, were exceptionally kind and helpful. Wendy had stayed with us in Devon to learn cheesemaking from my wife Mary Quicke, and now has her own dairy at Avalanche Cheese . Todd was an expert in renewable energy and was a serious investor in new technology through Two Seven Ventures. He knew many of the key people at RMI and in the low carbon businesses of Aspen.

Todd introduced me to Amory and to many of his associates, including Nathan Glasgow , a director of Sun Edison, a major PV company.

I had left England with a theory that we could quite quickly expect to see PV and electric vehicles integrated harmoniously into the UK grid, with the storage capacity of the cars’ batteries providing a daily flattening of the demand curve, which is very peaky, and expensively met by having large amounts of fast reacting combined cycle gas turbine stations perpetually on standby.

Nathan disabused me of the idea that this would happen anytime soon. Using electric vehicle batteries as described would void their warranties and thus render the process too costly, even with the feed in tariff and the subsidy on the vehicles.

Alex Hill of Amatis Controls introduced me to the work he is doing on the Internet of Things- using the internet to control  devices including electrical appliances – clearly of relevance to managing energy demand.

Amory Lovins is inspirational – there are myriad opportunities to promote the low carbon economy he said, and wrote a message to that effect in my copy of his book, Reinventing Fire.

3.       My return to England
So I returned to England excited but with no clear answers or direction. How could I contribute to the process of the decarbonisation of our electricity system? We had already installed over 150 kW of PV at Occombe Farm in Torbay, at Quickes Farm, and at our home.
I discovered that in Canada and some parts of the US, a company called Sequentric, led by Daniel Flohr, had  begun to install large domestic hot water tanks with three immersion heaters in them, and that the electricity supply companies could switch them on and off without leaving the customers short of hot water. This enabled them to cut the peaks and fill the troughs in demand at relatively low cost.  Bizarrely, from an English point of view, many Canadians rent their hot water tanks from the electricity companies. This made it easy to gradually roll out the new tanks and get the load management they were after.
The stock answer I got in UK to this sort of system was that we would have to wait until the rollout of smart meters for it to be possible – and that would not happen until 2020!
4.       Time of Use Shifting
I realised that what it came down to was not so much how much electricity we all used, but when we used it. Our entire wasteful and carbon guzzling electricity system was set up to give people as much electricity as they wanted, at  the time they wanted it, and at no variation in price except in the middle of the night if they opted for the economy 7 tariff.  So no-one had any reason to even think about when they used electricity during the day.
Except of course for people who had fitted PV systems- they very quickly realised that electricity was “free” to them whenever the sun shined – and they were busy shifting their time of use accordingly!
I know because I am one of them- I use my washing machine when the sun shines, and will often  adjust the time when I switch on my immersion heater –and even when I cook – to make use of the electricity I am generating myself.
I realised that much of the time shifting was easy, convenient, and even automatic, when I began to fit time switches to appliances – or use the time delay facility on my dishwasher.
I also realised that if enough of us did it, we could start to close down fossil power stations, and use more renewable electricity.
I’m doing it; can I help you to do it?
See my site theintelligentplug.com to find out how you can.

And as a final thought, here's Amory Lovins (what a wonderful name) at his TED talk best .....