Are we looking for quarters where the light is?

Most of the demand side response solutions available today are aimed at the industrial and commercial sectors. This is hardly surprising, given the absence of financial motivation for domestic consumers to change their behaviour.
But peak winter demand in UK is overwhelmingly caused by domestic users, and it's getting worse, for three reasons:


So if we behave altruistically in the way we do with recycling, we can make the difference necessary to close power stations at home. 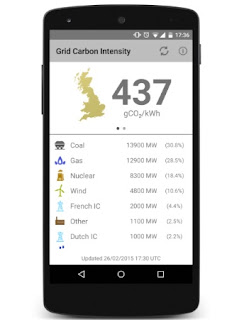 The University of Southampton has produced a useful app that tells us the carbon intensity and real time production of different sources of electricity, see http://www.gridcarbon.uk/

Unsurprisingly, the carbon intensity per kWh falls with consumption, as baseload nuclear becomes a bigger proportion of generation at night.

Where does this leave the Wadebridge Sunshine Tariff experiment? For the sixty households involved, electricity is very cheap during summer daylight hours - this is to encourage use when solar PV is generating. But for much of that time, the sun is not shining in Cornwall, and people are being subsidised to use dirty coal and gas electricity.


If everybody did this we would save £50 billion in new nuclear capacity costs.

How much difference will smart meters make to time-of-use by UK domestic consumers? 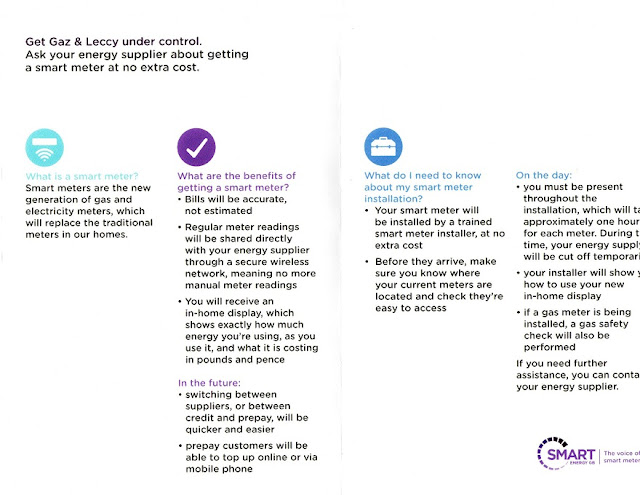 Today Smart Energy GB kindly sent me some copies of the above leaflet.
How much difference will the type of smart meter now being rolled out across UK actually make?
The suppliers have successfuly lobbied for them to focus on ease of billing. In theory they will also make switching supplier easier.
But there is no mention on the leaflet of the value to all of us of time-shifting consumption away from the peak.
Until we raise public awareness of how much we will all save when we get round to doing it, what is the point of the taxpayer spending £350 on each smart meter?
Posted by tomgld1 at Monday, June 13, 2016 No comments:

What Happened in the Peak Week of UK Electricity Consumption in 2016? 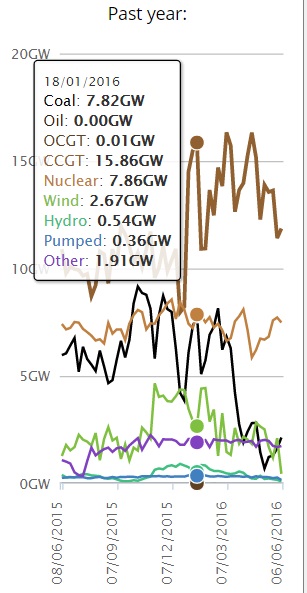 In the week of 18th January 2016, which was the week with the highest average electricity demand so far this year, we consumed an average of 38.7 GW .
But the peak in the year was just over 52 GW, so if we could completely flatten our consumption, we would reduce the need for new power stations by 13 GW.
Very little of peak demand is met by renewables - an inconvenient truth for low carbon pundits like me - wind and hydro only contributed 8% of the total in that week. Solar will have contributed much less as it is dark at peak times in mid-winter.
Nearly half the demand in the week is still being met by gas. It is agreeable to see that subsequent to the peak weeks, coal fired production fell dramatically - coal fired stations are being decommissioned.
But how will we meet next year's peak?
It will be much easier to do so without resorting to coal on a big scale if we manage our domestic demand better - that means you, me, and all our neighbours!
Keep spreading the word!

Who is the main culprit in creating high peak demand in winter? 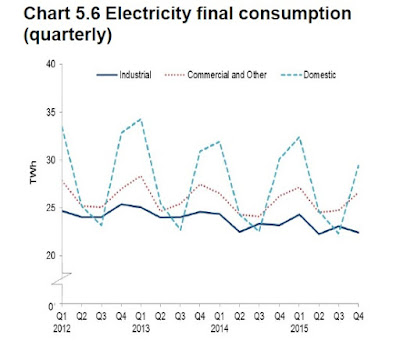 This slide, from a UK DECC report, clearly shows that domestic consumption is both the major consumer of electricity in winter, and the most peaky seasonally.
Much work has already been done on smoothing industrial electricity consumption, because it is relatively easy for centralised organizations to bring it about.
If you like decentralization, people power, and a low carbon future, then reducing domestic peak consumption in winter is a must!
Let me know what you are doing about it. Please.
Posted by tomgld1 at Monday, June 06, 2016 No comments:

Who pays for the absence of energy efficiency?

Here's an example on a small scale of what can be achieved by a combination of efficiency and time shifting of electricity demand, courtesy of a yes you've guessed American company, CP Power

They have almost halved the peak consumption of an industrial user in this example.

Were we to halve our peak consumption in UK, we would save around 25 GW and £200 billion in new capacity and distribution costs at Hinkley C prices.

Each GW we save from the peak is worth £8 billion. How long before we save the first one?!

For how long each year is UK electricity demand at or near its peak?