The Web we Weave 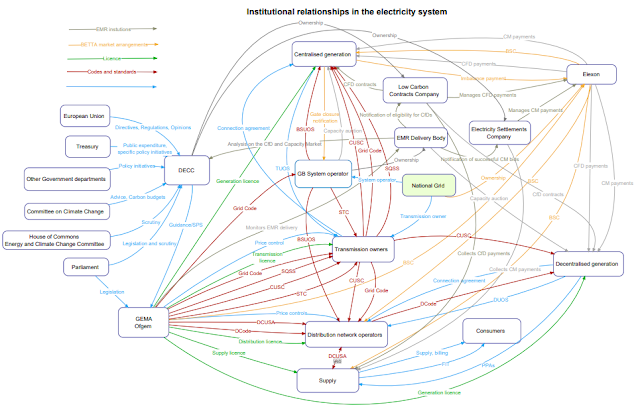 Bridget Woodman of Exeter Energy Policy Group and Laura Sandys of Challenging Ideas put forward the spider chart above to demonstrate how the electricity industry is (dis)organised.

What if consumers could operate in a transparent and market-oriented model?  Would we see more rational buying decisions throughout the system?

Or could we even see the time when the electricity system operated with no burden on the taxpayer, appropriate levels of reliability and at progressively lower levels of carbon output that put our current performance to shame? Would the "trilemma" become an obsolete concept?

There are those who think so.

I hope they are right!

For the time being, keep time shifting away from the peak!
Posted by tomgld1 at Tuesday, February 20, 2018 No comments:

Modest Peak Consumption decline mirrored by Capacity decline - can we do more? 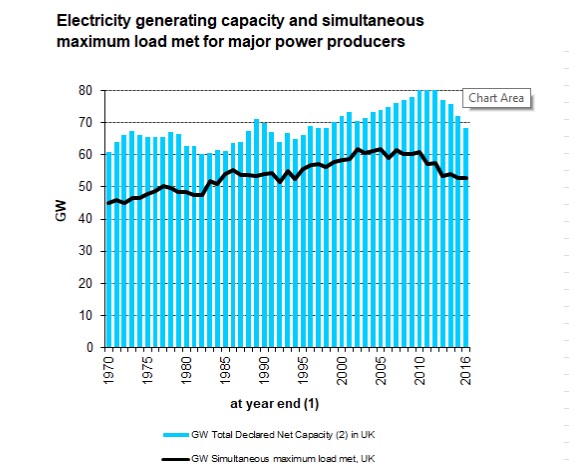 After an inexorable rise over most of the 20th Century, peak electricity demand in UK peaked in around 2002 at just over 60GW, plateaued until 2011, and since then has at last started to fall. This year it will be around 50GW, back to where it was in 1977.
But as my wife's uncle used to say, let's not get too euphoric.
Peak demand is still around 10GW above average demand, with an opportunity cost of £80 billion at current firm low carbon capacity costs.
Deindustrialisation and more efficient appliances have been the main drivers for peak reduction so far, with some help from industrial triad charges avoidance, but not domestic demand response.

Domestic demand response, not more wind or solar, are the best bet for reducing this peak winter demand further.

It will also reduce the need for  some of  the 30 or so new nuclear power stations we will otherwise require to supply the electric cars that will replace our petrol and diesel ones. Some say that the reason nuclear is so expensive is that we have gone way beyond the optimum size for cost, and we should be aiming at much smaller reactors - say 50 MW.
These can be built, transported and housed in much cheaper ways, using existing technologies.
If you still don't like or trust nuclear, then what other solution do you you have than to substantially reduce peak demand? There is no technology on the horizon in UK that is cheaper, more reliable and less carbon intensive than simply shifting demand away from the peak- intermittent renewables are irrelevant in this context, because the cost and carbon footprint of the necessary storage is worse than nuclear I assert...